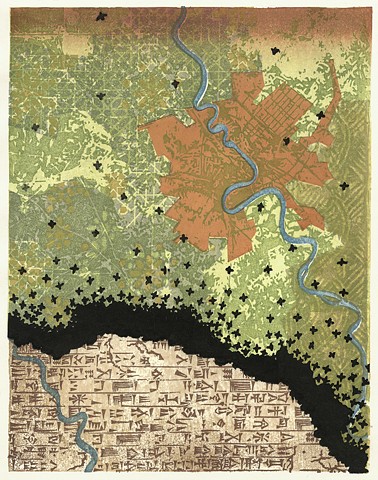 Based on a satellite view/map of the area between the Tigris and Euphrates rivers that includes Baghdad, this print references the area called the Fertile Crescent, the biblical land of Babylonia. This is the place where the ancient Sumerians developed the earliest known form of writing, cuneiform. It's the place where the ruler named Hammurabi wrote some of the earliest known laws in the world, laws that underpin our own legal system. I was thinking about the looting of some of the oldest artifacts in the world that occurred after the U.S. invasion of 2003, as well as the seemingly unstoppable chaos that the invasion unleashed.