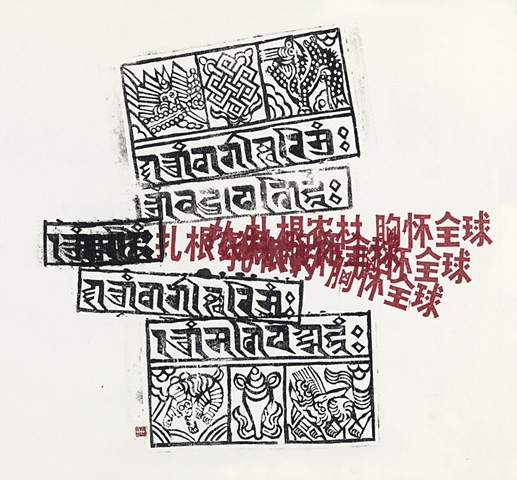 In July of 2006, the Qinghai-Tibet railway connecting Lhasa to the existing China rail network opened to great fanfare. Before then there were only two ways into Lhasa, an expensive plane ride or three days and nights on a bus along treacherous mountain roads. China's rulers say that the rail line is opening up Tibet and bringing greater prosperity for all its people, but Tibetans say that the rail is accelerating the demise of Tibet's unique culture and way of life.

The print was created from two woodblocks, an authentic Tibetan "windhorse" prayer flag block that I purchased at a local Tibetan store and a block I carved based on Chinese characters from a 1970s propaganda poster. The red Chinese text reads "Take root in the countryside while keeping the world in your heart".