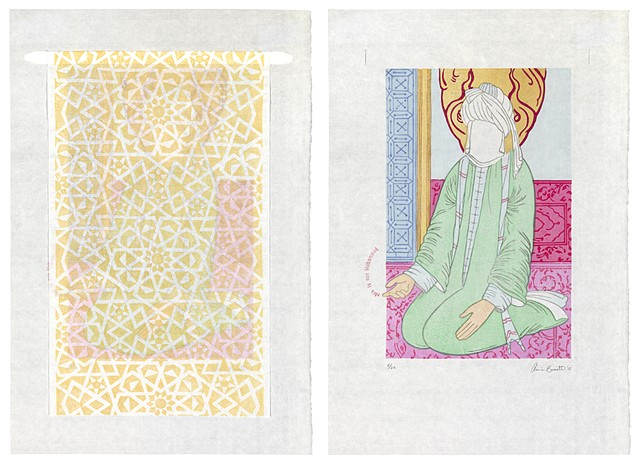 A REAL FAKE: THIS IS NOT MUHAMMED
Watercolor woodblock print with gold mica, rubber stamp, and removable printed veil
< previous

I began working on this print, for a portfolio called A Real Fake, the week after several men claiming to be acting for Islam attacked the office of the magazine Charlie Hebdo in retaliation for the publication of cartoon depictions of the Prophet Muhammed. The Charlie Hebdo attack was not the first time that depictions of Muhammed by westerners have caused fury in the Muslim world, and will likely not be the last, but the claim that Islam prohibits depicting the Prophet seems to be not entirely true. I found numerous online examples of historic Islamic paintings depicting the Prophet, and I decided to recreate a 16th century painted reproduction of a 14th century Islamic painting from a Turkish epic/biography called the Siyer-i Nebi. Essentially, I created a Japanese-method woodblock reproduction of an online reproduction of a 16th century painted reproduction of a 14th century Islamic painting of Muhammed. I made a fake, a forgery, but one with real implications and potential repercussions.

Because of the touchiness of the project, I found myself acutely aware of my motives, my decisions, and my actions as I worked. I thought about blasphemy, authorship, censorship, responsibility, and the power of art. I played Sufi chants to Allah in my studio. I pondered the connection between ukiyo-e and cartoons (manga). And of course I thought about religion.

When I looked at my completed print, I found the image too unadorned and my own gaze as the viewer too insistent, so I decided to give the image a veil. I carved another block with an Islamic tile pattern, printed it on thin sheets of gampi, and mounted each veil onto tabs that fit into cut slots on the print, making the veil optional.