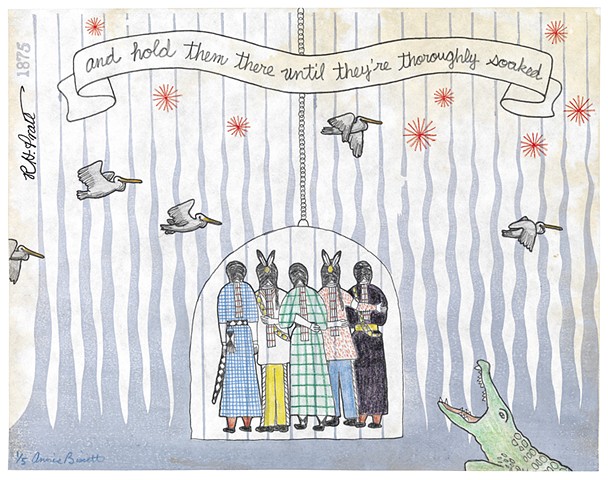 PRATT THE BAPTIST
next >

"In Indian civilization I am a Baptist, because I believe in immersing the Indians in our civilization and when we get them under holding them there until they are thoroughly soaked." –Richard Henry Pratt

This print/drawing was created for a 72-artist project called Re-Riding History, curated by Emily Arthur, Martin Begaye, and John Hitchcock. In 1875, seventy two Plains Indians were captured at Fort Sill, Oklahoma, and exiled to Fort Marion in St. Augustine, Florida, where they were subjected to military methods of ‘Indian assimilation’ under the direction of Lt. Richard Henry Pratt. Four years later, Pratt founded the Carlisle Indian Industrial School in Pennsylvania. The Carlisle School was the first off-reservation Indian boarding school, and it became a model for Indian boarding schools everywhere. It was in operation from 1879 to 1918, and during that time more than 10,000 students passed through its doors.